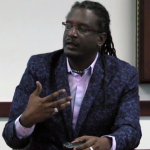 Elshafei is an artist working in multiple media, including photography, installation, sculpture, painting, drawing, and sound. Much of his work focuses on documentary photography projects, and is noted for its political engagement with different world cultures.  He is also a longtime human rights activist, intensively engaged with international and Sudanese civil society organizations both in Sudan and in the diaspora. Trained in sculpture at the College of Fine and Applied Arts at the Sudan University of Science and Technology, Elshafei earned his Masters of Fine Art at the School of Art and Design, University of Michigan, in 2008. Between the periods 1996-2000, Elshafei spent two years living and traveling with the Umbororo nomads of Sudan.  His life experiences and documentation of their culture and artwork led to a public sculptural installation, Umboror Crossing, which won him the Golden Paintbrush Award from the city of Ann Arbor, Michigan, in 2008. During his time with the Umbororo, he traveled extensively in the Blue Nile and Upper Blue Nile States.  For more information and full c.v., visit http://www.shafeiart.com.

The Sudanese regime headed by Omar al-Bashir is responsible for many crimes against humanity, as evidenced by his indictment in the International Criminal Court. In addition to atrocities committed during the long civil war with the south (now South Sudan), the ongoing conflict in the western region of Darfur has caused the death and displacement of hundreds of thousands of Sudanese people, and the destruction of many important ancient archaeological sites in the country. The repeated conflicts initiated by the government against its own people are born from and demonstrate the al-Bashir regime’s refusal to accept, acknowledge, and respect the diverse peoples, cultures, and religions of Sudan.  Currently, fighting has erupted in South Kordofan and, more recently, in the Blue Nile state. In keeping with his decision to dispel all humanitarian and aid workers and media in Darfur in 2009, the al-Bashir regime has restricted the access of humanitarian groups and journalists to these conflict areas, particularly South Kordofan.

Elshafei recently traveled to the Nuba Mountains and Blue Nile regions in Sudan and also visited five displaced person camps in South Sudan, documenting in photographic images and video testimonies the conditions for local people on the ground.  He will share a slide show of select images and video from this work to report to the Sudanese community, students and other organizations on the status of shelter, education, health, and human rights among civilians caught in this conflict.  In so doing, Elshafei hopes to engage community members in dialogue about possible solutions to this conflict and ways to ensure a dignified life for all citizens of Sudan.

“Eye on Africa” is the weekly seminar series of the African Studies Center at Michigan State University. Read more about Eye on Africa...